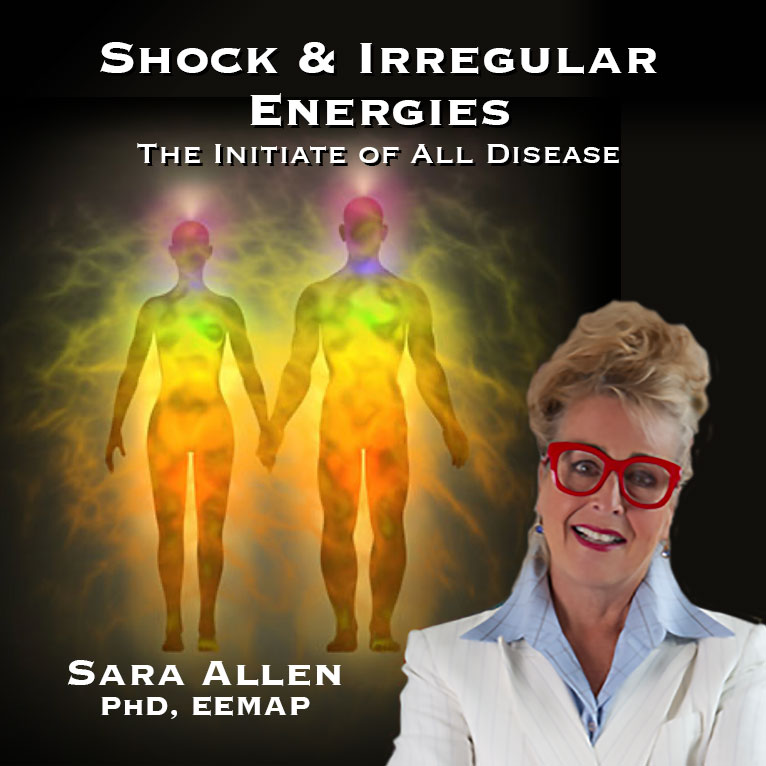 Learn how to track shock once it enters the body as well as how to steady the body so it is no longer vulnerable.  Excellent for supporting severe imbalances. Extremely important during these times.

I feel this shock piece – this class Shock & Irregular Energy – is the most important piece I have to offer to the Eden Community. I feel that practitioners will ease so much suffering when they have insight how the body gets shocked and how shock lodges in the system and creates disease patterns.

Shock & Irregular Energies: The Initiate Of All Disease

Here are some groovy tidbits about this class…

This class was originally presented at the International Gathering of Eden Energy Medicine practitioners in San Diego September 2012.

In the German New Medicine system, they teach that all disease is initiated by an emotional shock to the system. GNM teaches that all shocks are subjective – what may shock and initiate a disease process in me might not disturb another’s system at all. Donna Eden stated at the Portland Practitioner’s Conference that shocks to the systems initiate irregular energy patterns.

I had long recognized that irregular energies, if left unattended, create disease patterns.

While sitting in that class with Donna I had a “chocolate runs into peanut butter moment” – you know that old Reese Peanut Butter Cup commercial – when the chocolate bar accidentally gets stuck in the jar of peanut butter and WALA – a novel idea is born.  The German New Medicine (chocolate bar) system teaches that all disease is created by a subjective shock and Donna (big jar of peanut butter) stating that all irregular energies are initiated by shock.

So my thinking was, very simplistically put, like this:
Subjective shock = Irregular Energy Patterns = Disease Patterns.

That moment in Portland sitting in Donna’s class gave rise to a large vortex of curiosity in me and I began to track and study the energy of shock.

As a result of this convergence of this brilliant and perfect storm of information, I began to understand how we get shocked and how shock turns energy irregular. I learned how to track it once it enters the body. I learned how to heal it when it runs rampant in the body and, most importantly, I learned how to steady the body so it is no longer vulnerable to being shocked. I have since learned how to teach all about shock.

Below are the handouts from the class:

You are given limited permission to access the video and print a copy of pdf for personal use only. If you wish to share the video & pdf, please share the information (goodforyouenterprises.com) on how individuals can purchase their own copy. Course fees support the continued research, creation, filming, editing and distribution. Your support is greatly appreciated.

© 2022 Good For You Enterprises, All rights reserved.